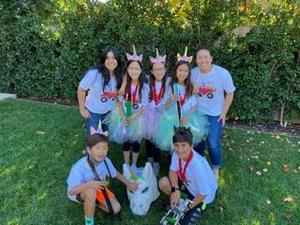 We are so excited to Announce that our team - The Unicorns of Doom Delivery Service, Fueled by Mac & Cheese and Chicken Nuggets won the Championship award and were nominated to compete for the Global Innovation Award (They were in the top 20 teams out of 200) , when they competed on November 13th at La Canada High School.
>
> Championship's Award
> The awards recognize teams that fully embrace and excel in all areas of FLL. These teams have achieved excellence and innovation in both the Robot Game and Project and demonstrate outstanding Core Values.
>
> They competed on December 11th for the Global Innovation Award. And on December 12th for the Southern California Championships, at West Ranch High School in Santa Clarita.  They received the Innovation Award 1st place!